Welcome to my art blog

A self-taught artist, I have always been drawn towards the macabre. Born a twin on Christmas Eve 1964 in Montreal, my twin died several months after birth. This became a large influence in my creative process; isolation, detachment, duality, haunted visions coming from this astral being that I am forever tethered to.
Art has always been my way to process and filter what I come across, what I am subjected to, or what I subject myself to each day; a way for me to exorcise the demons on my shoulder. The paintings are empathic, often inspired by the individual’s strength in the face of their own weakness. The common thread in all of my works is survival of self.

If a viewer is made uncomfortable by my work, then I have done my job as an artist. I have touched something within them that they are not comfortable with. I want to elicit a visceral response but maintain a sense of the absurd, creating works that are both intensely horrifically personal and humourous.

I am inspired by artists that have celebrated the grotesque: Hieronymus Bosch, Joe Coleman, Otto Dix and George Grosz.

This blog is a progression of my work, works in progress, random thoughts etc. You can join me on Facebook or view a gallery of my work on Flickr at: 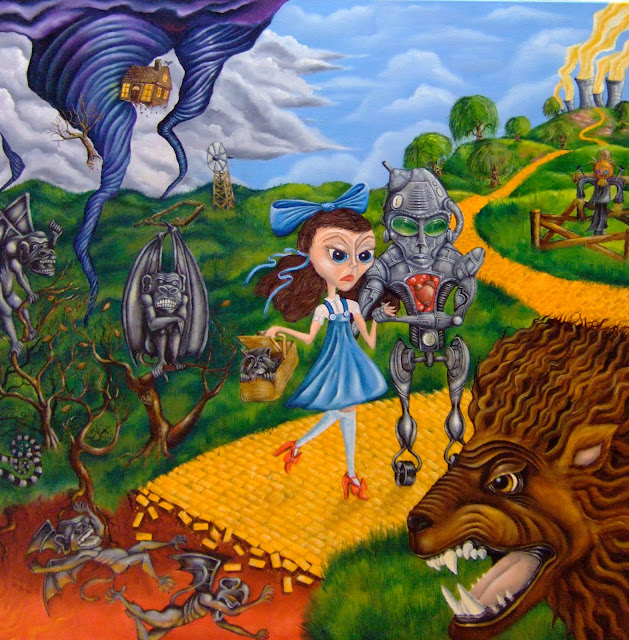 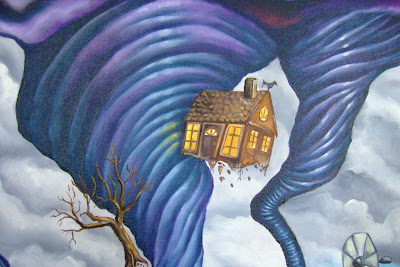 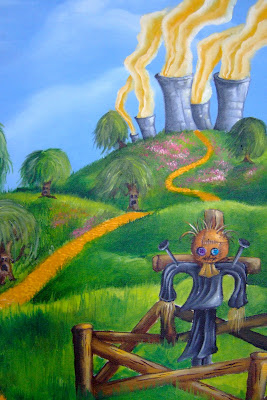 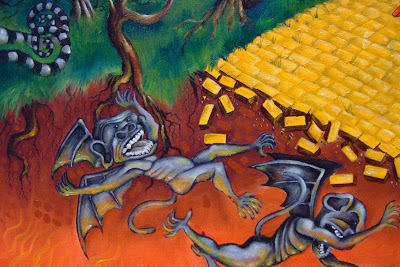 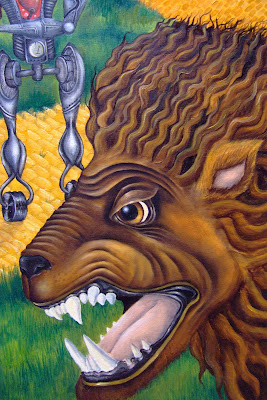 Posted by Grant Cunningham at 9:00 AM No comments:

Quotes, Forgotten Art and the Grotesque

I opened up a dusty old portfolio I had and came across these two early pen and ink works:


and another that I did for an art contest in 1994 for Griffon beer, aptly titled "Griffon" 48"x24" pen and ink on illustration board.  I didn't win the contest...


I've always had a hard time describing the type of art I do.  I've recently been reading about artists such as Otto Dix and George Grosz, and although they were from war time Germany, I do see similarities. I'm from war time now.   I also came across these quotes and thought that they were befitting of my art as well.


"The grotesque is the expression of the estranged or alienated world, i.e. the familiar world is seen from a perspective which suddenly renders it strange (and, presumably, this strangeness may be either comic or terrifying, or both)." 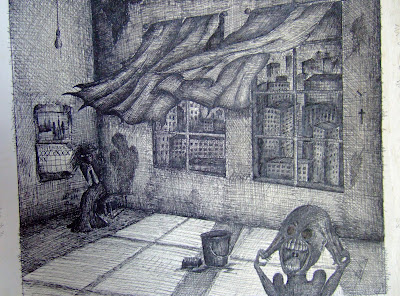 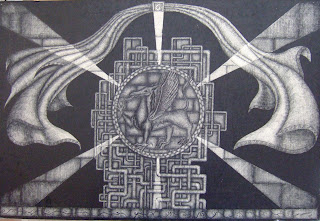 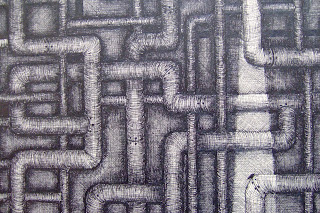 Posted by Grant Cunningham at 1:00 PM No comments:

This was a piece I did waaaay back in the early-mid '90s as part of the "My Inner Child Is A Serial Killer" solo show at the now defunct "Isart".  My style has definitely become more refined since then, but I do like the colors in this piece. 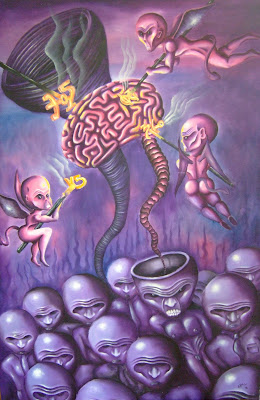 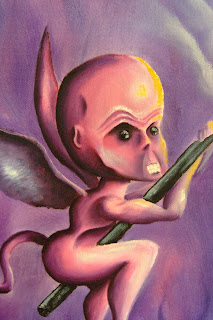 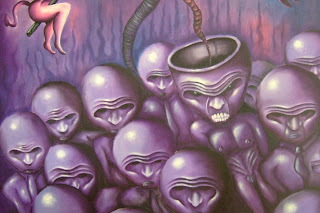 Posted by Grant Cunningham at 5:54 AM No comments:

An oil painting I did last year... it was inspired by my need to unplug from toxic people.  It was also one of the first times I tried varnishing a finished painting with damar varnish - which btw makes the final piece a bitch to photograph... I somewhat like the effect of high gloss that isn't the "plasticized" trend that far too many artists are doing right now (although I must say, I have a box of it in my supplies and am trying to figure out how to plasticize pills without them melting... ideas anyone???) 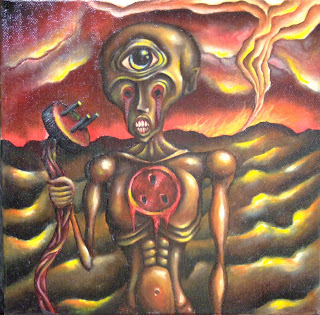 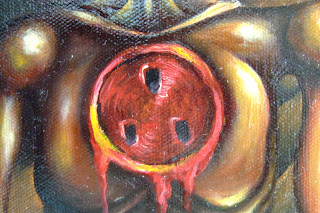 Posted by Grant Cunningham at 5:48 AM No comments:

A recent water color work - part of my first experimentation with watercolors. 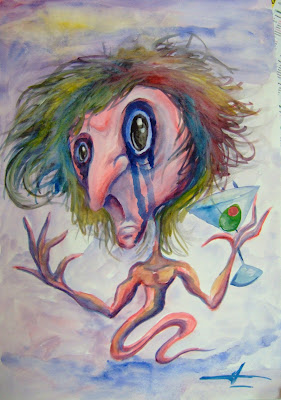 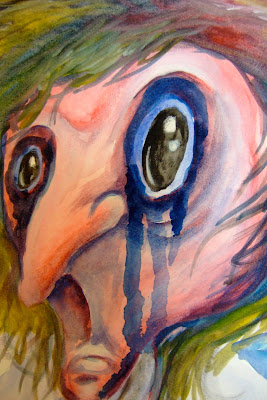 Posted by Grant Cunningham at 5:44 AM No comments: 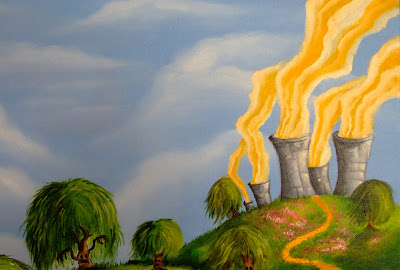 I will resist the urge to complain about the heat and will continue to fantasize about the day where I will have an icy cold studio to seal myself into during Montreal's crazy humidity ridden summer months. I find it very hard to paint in the heat but am soldiering on with this piece - it's been awhile since I've worked on a large scale painting. Happy with the progress but I really want to leave the final reveal until it's 100% finished.
Posted by Grant Cunningham at 4:20 AM No comments:

It's incredibly hot here in Montreal today... apocalyptic hot. I present "Black Horse"... the 3rd pen/ink/graphite in the Four Horsemen series. For those not up on their apocalypse trivia, the black horsemen is Famine. 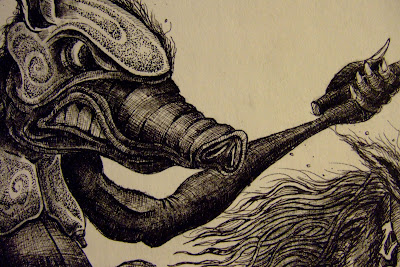 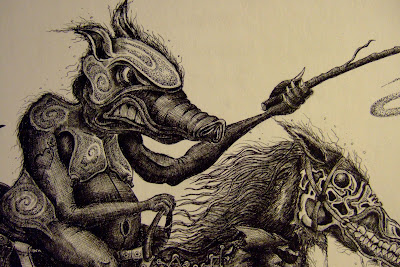 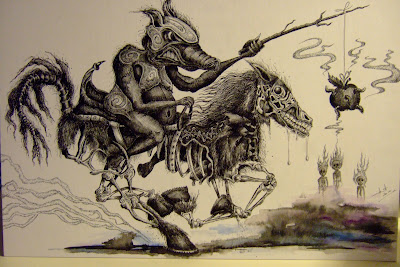 Posted by Grant Cunningham at 5:44 PM No comments: